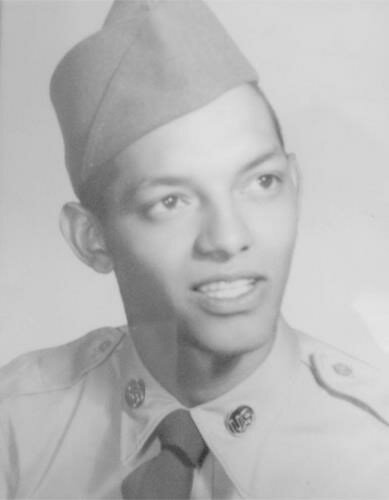 Please share a memory of Calvin to include in a keepsake book for family and friends.
View Tribute Book

It is with much sadness we announce the passing of Calvin Arron Carrillo on August 1, 2022. He was born August 2, 1933 to his parents Guadalupe Martinez Carrillo and Mildred Frances Harris Carrillo.

Calvin was born at the home of his grandparents Benjamin "Bud" Harris and Viola Williams at 808 Walnut St, Chico which is now student housing for Chico State University students. Calvin and his sister were raised by their grandparents. His mother Mildred died from complications from surgery at the age of 23. Calvin was one year old and his sister Carmen was two years old when their mother died. His father, Guadelupe (Lupe) was very close to Mildred's parents.

Alvin started his education at Rosedale Elementary School walking the distance from 808 Walnut. Ms. Stancil was the principal at the time. Calvin had a very happy childhood. He joined the Army in 1954 and was honorably discharged at Presidio, San Francisco, Ca in 1962 Calvin had one daughter from his first marriage and two daughters and one son from his second marriage and one son much later in Chico. A close friend of the family, Verna McDaniel, kept in touch with Calvin. Keith and Cathy Little were neighbors of Calvin and were truly helpful to Calvin during his illness, and were they were with him when he was admitted to the Gridley Hospital where he passed away. He leaves to mourn him his sister Carmen, his four children, nieces and nephews and friends.

The family appreciates the Gridley Block Funeral Home-- Lisa, Matt and others-- for their help and Shane Fairman of Chico Cemetery. And thanks to his caregiver Cindy. A graveside service will be held at the Chico Cemetery in the Veteran section Wednesday, Sept 28, 2022 at 1 p.m.

Share Your Memory of
Calvin
Upload Your Memory View All Memories
Be the first to upload a memory!
Share A Memory