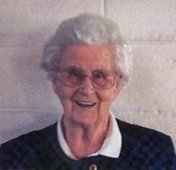 Kathleen Ellen (Helen) Lindsey Helen was born and raised in London, England (October 8, 1917), a year before the end of WWI. She was in an Anglican convent; it was a very wealthy one. It was a happy life. At age 18 she began training to be a nurse in a London hospital. She was nursing during the bombing of London in WWII. February 28, 1942 she married an American soldier, Edward Sjabam Tor. Twin girls, Edwina and Kay were born to them in 1944, and in 1945 they came to the United States of America on the S.S. Argentina, an American troop ship. They lived in Escondido, CA and another set of twin girls, Margot and Mollie were born in 1948, followed by Wendy in 1949. In 1959 they moved to Richvale for about 16 years. She worked at the Richvale School Cafeteria and cooked for 8 years for 60 people. In 1975, Helen was divorced and moved to Norfolk, England where she worked as a nurse. In 1984 she married Herbert Lindsey. They were married for 6 years. He passed away after a brief illness in 1990. She moved to Gridley in 1995 and was active as a Pink Lady and Woman’s Club member for 13 years, Writer’s Club for 6 years and a member of St. Timothy’s Episcopal Church for 10 years. A Celebration of Life will be held for Helen on August 14, 2021 at 1:00 p.m. at St. Timothy’s Episcopal Church in Gridley. Arrangements entrusted to Gridley-Block Funeral Chapel, 530-846-2138.
Saturday
14
August

Share Your Memory of
Helen
Upload Your Memory View All Memories
Be the first to upload a memory!
Share A Memory
Send Flowers