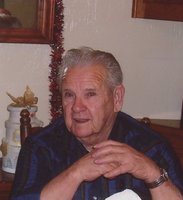 David Orben Smith passed away Saturday morning, 3/14/2020, at his home in San Tan Valley, Arizona, at the age of 93. He was preceded in death by his wife of 57 years, Loretta Alice (Knight) Smith. He is survived by his children, Retired Oroville (California) Police Sergeant Robert M. “Mickey” Smith and his wife Sally of Palermo, CA; Mrs. Dixie K. Murphy and her husband Lee of Myrtle Creek, OR; and Mrs. Debra D. Baker and her husband Mark of San Tan Valley, AZ. His survivors also include his brother, LeeRoy Smith, eight grandchildren, nineteen great grandchildren, three great great grandchildren, and numerous other cousins, nieces, nephews, and in-laws. He was greatly loved and will be sorely missed by family and friends. David was born in the Indian Nations, Oklahoma, November 20, 1926, to James Smith and Lizzie (Yadon) Smith, the second to the youngest of seven boys. His family moved to Belen, NM while he was a young child. At the age of 9 or 10 David and family moved to Live Oak, California. David spent the majority of his life in various locations in northern California, especially Biggs and Oroville, before relocating to Arizona in November 2018. David grew up during the hard and rough times of the Great Depression and challenges of World War. He proudly served in the U. S. Navy during the latter part of World War II, assigned to the carrier, USS Sitkoh Bay. He was a member of the American Legion, and a lifetime member of the Veterans of Foreign Wars. David’s main occupation was employment with various logging companies and saw mills. He was always a very likable friend and companion and he loved his family. He was always the first to cheerfully come to the aid of family members in need. An avid outdoorsman, he enjoyed hunting, fishing, and camping. A lifelong patriotic American, David served God and country well and is now in the presence of the heavenly Host. Graveside services and celebration of David’s life will be conducted at the Oroville Cemetery, 5646 Lincoln Blvd. Oroville, CA. on March 20, 2020 at 11:00 AM. Services will be conducted by Pastor John Craig of Clean Slate Community Church, Palermo, CA.