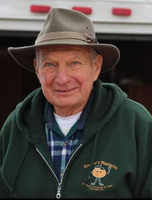 George was a carpenter by trade, but most knew him for his delicious mandarins. He and his wife owned and operated Doering’s Mandarins for the past 55 years, building the business from scratch.

George was a religious man who was a member of Grace Lutheran Church in Gridley. He was a devoted family man that touched everyone he met. His warm smile and twinkle in his eye made you feel instantly like family.

He is survived by his loving wife of 62 years, Patricia, and their children, Mark, Ken, Terri, Lisa, 22 grandchildren, 12 great-grandchildren and sister Janet. He was preceded in death by his parents, Emil and Betty; and daughter Tammy.

Visitation is scheduled for Monday, July 29, 2019 from 5pm – 8pm at Gridley Block Funeral Chapel. The funeral will be held at Grace Lutheran Church on Tuesday, July 30, 2019 at 10:00 am with a graveside ceremony and Celebration of Life directly following.